Greta Van Fleet is a rock band. It is from Frankenmuth, Michigan, a small suburb town. It was formed by four members, whereas three of them are brothers. Josh Kiszka and Jake Kiszka are twins and Sam Kiszka is their younger brother. Josh Kiszka was the lead vocal. Jake Kiszka was for both guitars and backing vocals. Sam Kiszka was the backing vocals, keyboards and bass guitar. Hauck was for drums. Hauck left the band in 2013. Danny Wagner who is a very good friend of the brothers replaced him.

Their live EP was recorded in 2014 and released in the same year. Their music is divided into two categories, blues rock and hard rock.Their singles which grab the position in different charts are ‘When the Curtain Falls’,‘Highway Tune’, ‘Safari Song’, ‘You're the One’ and ‘Lover, Leaver’. Their other charted songs are ‘Edge of Darkness’, ‘Flower Power’‘Black Smoke Rising’, and ‘Watching Over’.

Where is Greta Van Fleet Band from?

Greta Van Fleet is a rock band. It is from Frankenmuth, Michigan. Frankenmuth Is a small suburb town.

How old is Greta Van Fleet?

It was formed in 2012, almost seven years ago. Jake once told that he started playing the guitar at the age of 2 or 3.

Who is the real Greta Van Fleet?

It was formed by four members, whereas three of them are brothers. Josh Kiszka and Jake Kiszka are twins and Sam Kiszka is their younger brother. Kyle Hauck was the fourth member. There is not enough information about their parents.

How did the band Greta Van Fleet get their name?

In 2012, they were about to perform in a festival in their hometown, but no band name was decided. Then, they heard the name of a resident Gretna Van Fleet from their relatives. She lives in Frankenmuth. They found that name interesting and decided their band’s name similar to that.

They erase the ‘n’ to make the name easy and the band name was finally Greta Van Fleet. The 88 years old woman that the band name after was pleased that the band has earned so much name and fame. Though she does not like their music style, but she wishes them from her heart.

They are still very young. They are not married and do not have any kids.

At the beginning, Josh Kiszka was the lead vocal. Jake Kiszka was for both guitars and backing vocals. Sam Kiszka was the backing vocals, keyboards and bass guitar. Hauck was for drums. But he left the band in 2013. So after that, Danny Wagner who is a very good friend of the brothers replaced him. Everything remains the same till now like before. With Hauck, the band prepared two songs ‘Standing on’ and ‘Cloud Train’. ‘Highway Tune Was made by Jake Kiszka in 2010 but released in 2017. Their live EP was recorded in 2014 and released in the same year.

Their many songs like ‘Cloud Train’, ‘By the Riverside’, ‘Standing On’, ‘Written in Gold’, ‘Sing in the Rain’, ‘Motown Funk No. 4’, ‘Thunder Stomp’ and ‘Down to the River Were released before but currently not available. Their music is divided in two categories, blues rock and hard rock. The entire members like blues, but they also have different taste. Their song ‘Standing On’ was in ‘Chevy Equinox advertisements’ in 2014.

Their ‘Highway Tune’, the debut single was on the top of the ‘Billboard US Mainstream Rock’ and also on the ‘Active Rock’ charts for almost a month. Till now, they released two EP. The first EP, ‘Black Smoke Rising’ was released in 2017. The second one, ‘From the Fires’ was also released in the same year. It achieved Gold certification from MC. Their singles which grab the position in different charts are ‘Highway Tune’, ‘Safari Song’, ‘When the Curtain Falls’, ‘You're the One’ and ‘Lover, Leaver’.

Their other charted songs are ‘Black Smoke Rising’, ‘Edge of Darkness’, ‘Flower Power’ and ‘Watching Over’. They did few music videos as well, ‘Highway Tune’, ‘When the Curtain Falls (ver-1)’ and ‘When the Curtain Falls (ver-2)’. Their first studio album ‘Anthem of the Peaceful Army’ was in the market in 2018. Three songs from this album were in the ‘US main rock chart’ and also in other charts.

In 2016, they did a live performance of their song ‘Highway Tune’ on the show ‘Shameless’ an American comedy-drama. That song was also on iTunes as the 1st official song. The music video of the same song was released on ‘Loudwire’, an online magazine of America. The band got the chance to be on a tour with ‘The Struts’ in 2017. In that year, they signed a contract with Lava Records, an American record label.

The band got the chance of performing in ‘Academy Award Party’ of Elton John in 2018. It was for the AIDS Foundation. Even John performed with them for the songs ‘Saturday Night's Alright for Fighting’ and ‘You're the One’. Their first album ‘Anthem of the Peaceful Army’ was already selling like hot cakes after releasing in 2018.

Was Greta Van Fleet a Zeppelin cover band? From the beginning of Greta Van Fleet, they are being compared Zeppelin band. Many find lots of similarities between the two bands. The lead singer Jake has almost the similar voice of Robert Plant. Even Jake stated in an interview that he followed Jimmy Page’s work for a long time. They are definitely inspired and influenced by Zeppelin. And who wouldn’t? But they are not entirely Zeppelin. They definitely take inspiration from others work, but they have their own talent as well. They are really proving that they are different.

They do not talk much about their personal life. From the social media, we saw the photos of Sam Kiszka with his girlfriend. But there is no confirmation from their end. Danny Wagner is dating Mackenzie Kellie Anthony. Recently, his girlfriend posted many unseen photos on her personal Instagram account. It is heard that Jake Kiszka also has a girlfriend. 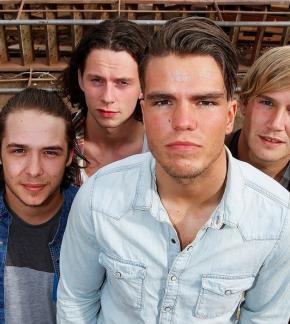