Mackenna Grace is one of those sweetest American kids who gained popularity at an early age. She is an adorable child actress from Texas, United States. Grace was just 6-year old when she officially began working as an actress. One of her earliest characters was of Jasmine Bernstein in a live-action situation comedy titled ‘Crash and Bernstein’. The series was aired on Disney XD between 2012 and 2014. She is well-known for playing Faith Newman’s role in another outstanding soap opera titled ‘The Young and The Restless’.

Grace made her acting debut in 2012 and since then she has appeared in numerous television series and movies. She is one of the most successful child artists ever lived in the history of America. She garnered positive feedback through her character Penny Kirkman in the Netflix series ‘Designated Survivor’. It was a political thriller drama produced by David Guggenheim. Another fabulous role that helped her draw attention was of Rose Harbenberger in another Netflix drama series titled ‘Fuller House’. It was broadcasted from 2016 to 2018. She also worked as young Theodora Crain in a remarkable supernatural horror TV series titled ‘The Haunting of Hill House’.

The 5 feet tall actress has dazzled the American audience with her truly exceptional acting talent. She performs the assigned characters with great sincerity and attention. That’s why she is always successful in impressing the directors and producers. Some of the most notable acting projects of the little stunner are titled ‘Goodbye World’, ‘The Pearl Whale’, ‘The Angry Birds Movie’, ‘Suburban Gothic’, ‘Troop Zero’, ‘Captain Marvel’, ‘Scoob!’, ‘How to Be a Latin Lover’, ‘I, Tonya’, and ‘The Bad Seed’. Aside from her film appearances, she also adorned the television screen with more than a few memorable roles in different TV shows.

Who are Mckenna Grace's Parents?

Mackenna Grace came to this world on Jun 25, 2006. She was born and raised in Grapevine, Texas, USA. She is the cute daughter of Crystal and Ross. The beautiful child actress doesn’t like to eat meat. She is an animal lover and love having lots of pets around. She has dedicated worked for animal rights through her associations with PETA (People for the Ethical Treatments of Animals) and Farm Sanctuary. She has openly spoken about animal rights in today’s world of greed. She has requested people to take care of their pets, no matter where they live. The little stunner always wanted to make her parents feel proud of her professional achievements as a child. She has been pretty successful in delighting her father and mother through what she has achieved today.

Grace was just 7 years of age when made her official acting debut in ‘Joe, Joe and Jane’. Soon after her first role, she appeared in famous Disney XD television series titled ‘Crash and Bernstein’. Later on, the impressive young actress was given the role of Faith Newman in the American TV soap opera titled ‘The Young and the Restless’. It was aired for two years between 2013 and 2015. She also played a recurring role on in a police procedural TV series

‘CSI: Cyber’. The back to back hit performances at the initial stage of her professional career literally impressed television directors and producers.

Mckenna made her film debut in 2012 when she appeared as Young Riley in a short film titled ‘R’. Later in 2013, she adorned the big screen with another striking appearance as Hannah Palmer in post-apocalyptic movie ‘Goodbye World’. It was written by Sarah Adina Smith and Hennelly. The same year she worked as Zelda in a horror-comedy movie ‘Suburban Gothic’. It was directed by a famous American director known as Richard Bates Junior.

After a brief halt, she surfaced as Lena in 2015’s first project ‘Russell Madness’. Later on, she worked as Molly in ‘Frankenstein’ and Granddaughter in a short movie ‘The Pearl Whale’. The year 2016 proved to be very productive in terms of professional success. She signed three hit movies that year. She portrayed Isabel’s character in the famous American drama movie ‘Mr. Church’. It included star appearances of Britt Robertson, Christian Madsen, Xavier Samuel, Natascha McElhone, and Lucy Fry.

She started 2017 with her role as Mary Adler in the movie ‘Gifted’. She also worked as Arden in a comedy film titled ‘How to Be a Latin Lover’. The smart girl received tremendous feedback for her outstanding performances in these films. The director Franck Khalfoun assigned her the role of Juliet Walker in another supernatural horror movie ‘Amityville: The Awakening’. Grace always liked working in horror and comedy movies. The same year she appeared as young Tonya Harding in comedy-drama movie ‘I, Tonya’.

Other prominent films that Grace worked in during her professional acting career are titled ‘Ready Player One’, ‘Troop Zero’, ‘Captain Marvel’, ‘The Bad Seed’, ‘Ghostbusters: Afterlife’, ‘Annabelle Comes Home’ and ‘Scoob’. Apart from her presence in American movies, she also worked as a television artist. The young actress has worked in many hit television projects including, ‘The Goodwin Games’, ‘Instant Mom’, ‘Gravity Falls’, ‘The Vampire Diaries’, ‘Clementine’, ‘Clarence’, ‘Crime Scene Investigation’, ‘Dog with a Blog’, ‘Teachers’, ‘Once Upon a Time’, ‘Bizaardvark’, and ‘Elena of Avalor’.

Grace started working as a child artist in 2012 and since then she has appeared in numerous movies and television series. She has turned 13 in June 2019. The impressive young beauty is still too young to fall in love with someone special. She is a big advocate of animal rights. Grace has used different platforms to raise awareness about animal protection and care. She is voluntarily working with animal-oriented organizations. She is not in a relationship with anyone as of today. The girl doesn’t want to get married before the next 10 years.

What is Mckenna Grace's Net Worth?

Mckenna is one of those lucky child artists who earned a massive reputation at a young age. She has amassed a decent amount of money through her professional career as an actress. Grace has successfully worked in numerous hit TV series and films. Her back to back hit appearances helped her built a sound financial status. She owns an accumulated net worth of $300,000. She makes money from her professional career as an American actress. 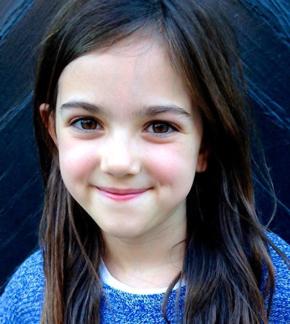