Lonzo Ball, born as Lonzo Anderson Ball, is the national basketball player from America. He plays for the NBA team of New Orleans Pelicans. He is one of the most popular sportspersons from the United States. The tall guy earned great prestige due to his matchless precision in throwing the ball. He has been playing basketball since his college days. He spent time playing with UCLA Bruins before getting selected for NBA’s Los Angeles Lakers. Lonzo was also named to All-Rookie 2nd Team of NBA in 2018. His exceptional skills in the field are acknowledged throughout the United States. The sportsman has become a great source of inspiration for young adults.

He attended the Chino Hills High School situated in Chino Hills, California. During his school days, Lonzo played basketball and received multiple records titled ‘National High School Player of the Year’. He led his school team and won many prestigious titles, making his school management feel proud. He also won the national championship while being part of his undefeated school team. During his freshman year in college, he broke the UCLA record for the maximum assists in a season. The guy also named himself the title of ‘Wayman Tisdale Award’. His playing time was constrained by knee and shoulder injuries while being the NBA Rookie with LA Lakers. Due to unexpected injuries, the player was sidelined for most time in the second season.

Most of the times, Ball plays as a point guard which is also his best position while playing basketball. Lonzo also runs a sports apparel brand from his father’s Big Baller Brand. He got chances to sign with other companies and endorse their products. However, he preferred starting his own business as a professional rather than signing with other brands. Aside from being the sought-after basketball player, Ball also tried his luck in the music industry. He rolled out his debut rap single titled ‘Melo Ball 1’ in September 2017.

Who are Lonzo Ball’s Parents?

The ball was born in Anaheim, Los Angeles, California to Tina Ball and LaVar. His parents were basketball players during their college era. LaVar, Lonzo’s father, is a big guy having a height of 6 feet and 6 inches. He played for Washington State and several other regions during his youth. He met the fellow basketball player, Tina. She stands at a height of 6 feet and 1 inch. Both of them get romantically involved with each other and finally got married. Lonzo was born within the first year of their marriage. He began playing basketball when he was just two-year-old. LeBron James was the person who inspired the little sportsman the most. Ball spent his childhood with younger brothers named LaMelo and LiAngelo. They all used to have a lot of fun together at home and in the neighborhood. Lonzo started playing basketball in Chino Hills School, California and received good appreciation from teachers and team coach.

During 2014 to 2015, Lonzo scored 11 rebounds, 5 blocks, 25 points, and 9.1 assists. In 2016 after joining UCLA, he worked hard to make Bruins as a top-scoring offense. The transformation started in contrast to the Pacific when he earned 19 points and assisted in 8 rebounds, and 11 assists. Subsequently, he led the entire basketball team to win the big championship game against Texas A&M. As a result, he entered the list of Wooden Award and remained there until the mid-season. Another player who accompanied Lonzo on that particular list was T.J Leaf.

Who is Lonzo Ball Married to?

Ball has been spotted dating his girlfriend Denise Garcia, who is a soccer player. The girl has played professional football for University of California, Seattle University, and Riverside. Both of them have been together since their school days. According to news sources, Garcia has been expecting the first baby from her relationship with Lonzo. However, there is no word available on their engagement or wedding. The couple is still enjoying a happy life together and we’ve not heard of any conflicts between the two. Critics are expecting the couple to get married soon. There are many rumors suggesting the Lonzo has been in a relationship with a few other women in the past. However, the player has not confirmed any such rumor. The relationship between Ball and Garcia got slightly affected by these baseless gossips. However, both managed to sort out the situation and continued their love life without letting anyone intervene in their personal life.

What is Lonzo Ball's Net Worth?

Lonzo is one of the most successful Basketball players from the United States. He has played for more than a few prominent basketball teams of the country. The guy has earned global recognition due to his amazing precision while throwing the ball. His accuracy helped him become the most influential player. Today, he owns an accumulated net worth of US $10 Million. The guy enjoys a luxurious lifestyle with his friends and family. 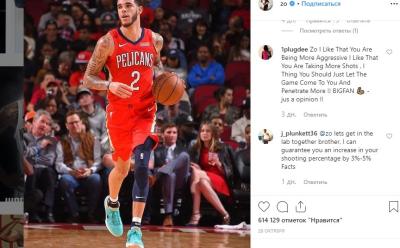